It’s Not An Intervention; It’s Gaslighting And Bullying 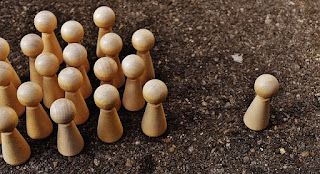 In the last few years I’ve heard the same story over and over. A person at work, uni or school is confronted by their friends who say they are ‘staging an intervention’ and then proceed to tell them where their character, behaviour, morals and general person needs ‘correcting’.

If that’s happened to you, let me suggest something. If you’re working in a small room, and someone comes in with an onion sandwich lunch that has your eyes watering, what do you do?

I bet you think first if it’s just you. And then, when you see your colleagues sniffing along with you, there’s a brief discussion where one of you is volunteered to go have a word.

When you do have a word, you very quietly take your colleague aside and say something like, “The sandwich is awesome, but uhm, in this lousy small office, it can be a bit over-present if you know what I mean.”

Then the other person says, “Eek, sorry” and deals with it.

Job done and everyone moves along.

So, I suggest that when you have a gang of people surrounding one person and attacking them, it’s plain old bullying. The fact that they use words like ‘intervention’ and go about ‘analysing’ your behaviour and saying they are only being absolute bitches because it’s for your own good is plain old gaslighting.

What’s interesting is that this modern bullying technique has a long history.  In recent history, Marxist-Leninist groups in Communist Russia, China and their allied countries weaponised criticism. They would set up a target and have their friends and colleagues harass them with accusations until they broke down. Victims were also made to self-criticize as part of the humiliation.

This same nasty mentality is what fuels the Flying Monkeys, the people who attack abuse victims by telling them they need to go back to their violent and controlling spouses, parents, bosses and partners.

In sociology, this practice is called mobbing.

My advice: don’t fall for it. If one friend has a quiet word, that’s great and you can take it under advisement. But when a gang goes for you, saying the meanest things they can while virtue signalling like mad, recognise them for what they are, tell them to get lost, and find a group of decent people.

Want to read up? Here are some articles and journal papers:

Moving The Masses: EmotionWork In The Chinese Revolution

Personality and Experience of Mobbing: Three Types of Mobbing and the Consequences at the Workplace

Image by Alexas_Fotos from Pixabay